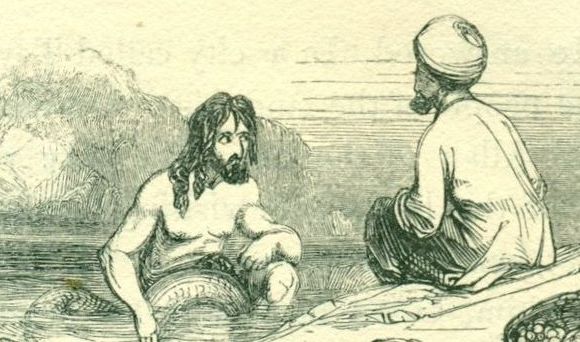 After this the caliph said to his host, O Abou Hassan, is there any service that thou wouldst have performed, or any desire that thou wouldst have accomplished? And Abou Hassan answered, In our neighborhood is a mosque to which belong an imam and four sheiks, and whenever they hear music or any sport, they incite the judge against me, and impose fines upon me, and trouble my life, so that I suffer torment from them. If I had them in my power, therefore, I would give each of them a thousand lashes, that I might be relieved from their excessive annoyance.

Alrashid replied, May Allah grant thee the accomplishment of the wis’h! And without his being aware of it, he put into a cup a lozenge of bhang, and handed it to him; and as soon as it had settled in his stomach, he fell asleep immediately. Alrashid then arose and went to the door, where he found his young men waiting for him, and he ordered them to convey Abou Hassan upon a mule, and returned to the palace, Abou Hassan being intoxicated and insensible.

And when the caliph had rested himself in the palace, he called for his vizier Giafar, and Abdallah the son of Tahir, the Judge of Bagdad, and certain of his chief attendants, and said to them all, In the morning when ye see this young man (pointing to Abou Hassan) seated on the royal couch, pay obedience to him, and salute him as caliph, and whatsoever he comman- deth you, do it. Then going to his female slaves, he directed them to wait upon Abou Hassan, and to address him as Prince of the Faithful: after which he entered a private closet, and, having let down a curtain over the entrance, slept.

So when Abou Hassan awoke, he found himself upon the royal couch with the attendants standing around, and kissing the ground before him; and a maid said to him, O our lord, it is the time for morning prayer. Upon which he laughed, and, looking round about him, he beheld a pavilion whose walls were adorned with gold and ultramarine, and the roof bespotted with red gold, surrounded by chambers with curtains of embroidered silk hanging before their doors; and he saw vessels of gold, and chinaware, and crystal, and furniture, and carpets spread, and lighted lamps, and female slaves, and eunuchs, and other attendants; whereat he was perplexed in his mind, and said, By Allah, either I am dreaming, or this is Paradise, and the Abode of Peace. And he closed his eyes.

Read More about The Story of Saidjah part 12