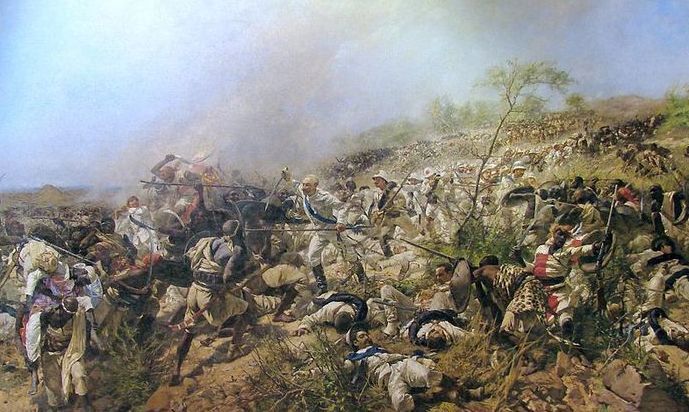 Who would now be living in her father’s house? Then he thought of his childhood, and his mother, and how the buffalo had saved him from the tiger, of what would have become of Adinda if the buffalo had not been so faithful. He watched the sinking of the stars, and as each disappeared, he calculated how much nearer he was to Adinda. For she would certainly come at the first beam—at daybreak she would be there. Why had she not come the day before?

He was hurt that she had not anticipated the supreme moment that had lighted his soul for three years with indescribable brightness; unjust as he was in his selfishness, it seemed to him that Adinda ought to have been waiting for him. He complained unjustly, for the sun had not yet risen. But the stars were growing pale, and strange colors floated over the mountain tops, which appeared darker as they contrasted sharply with places elsewhere illuminated.

Here and there something glowed in the east—arrows of gold and fire darted along the horizon, but disappeared again and seemed to fall down behind the impenetrable curtain which hid the day. It grew lighter and lighter around him: he now saw the landscape and could already distinguish a part of the wood behind which Badoer lay. There Adinda slept.

Knocked at her door

No, surely, she did not sleep! How could she? Did she not know that Saidjah would be waiting for her? She had not slept the whole night certainly; the village night police had knocked at her door to ask why her lamp burned so long, and with a sweet laugh she had replied that she had vowed to weave a slendang which must be ready before the first day of the new moon.

Or perhaps she had passed the night in darkness, sitting on the rice floor, counting with eager fingers the thirty-six lines. Or possibly amused herself by pretending that she miscalculated, and had counted the lines all over again each time, enjoying the delicious assurance that the thirty-six moons had come and gone since her Saidjah had left her.

Now that it was becoming light, she would be busying herself with useless little things, glancing from time to time over the wide horizon, looking for the sun, the lazy sluggard!

There was a line of bluish red, touching the clouds and making their edges light. The arrows of fire shot higher and higher, and ran over the dark ground, illuminating wide spaces of the earth, meeting, crossing, unrolling, running, and at last uniting in vast patches of fire, painting the azure earth in pigments of shining gold. There was red, blue, and purple, yellow gold. God in Heaven—it was at last daybreak! Adinda!